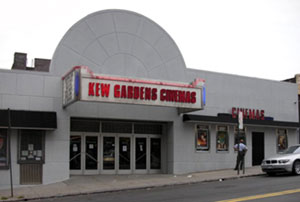 Built in the 1930's this neighborhood house called the Austin has had more faces then Eve. Spent years as a second run double feature house, until being taken over by Rugoff Theatres in the late 50's or early 60's. Art films were played for a few years catering to the affluent area and nearby Forest Hills.

The story has a happy ending: new owners bought the place, stripped it down to its minor Art Deco origins and made a mini version of the Angelika. The huge lobby has a concession stand where you can get coffee and fresh cookies. Two theatres were made in the old loge and restroom area on the second floor. Downstairs are four screens, number one keeping the original mini stage and arch. The other four auditoriums have top notch sound and projection and rocking chair seats stadium style.

The Kew Gardens is a total delight to attend, heres hoping it survives forever.

We have now upgraded all theaters to digital projection and 5.1 and 7.1 dolby digital sound and we have installed solar panels on the roof.

Get subway and bus directions powered by HopStop

Subway E & F to union turnpike or the LIRR to Kew Gardens
and walk up steps to the entrance of the theatre.

ALWAYS BE IN THE KNOW

Subscribe to Kew Gardens Cinemas email newsletter to receive updates and event notifications. You don't have to worry, we'll respect your inbox.